From Quadrivium to... Trivium

Beauty for Truth's Sake was about the four liberal arts known collectively as the Quadrivium. I wanted it to be as practically helpful as possible to people working to reintegrate wisdom and a sense of beauty and the sacred back into education. On this blog and on the main site where the book is listed I continue to place material to supplement what is in the book. One of the resources I recommended is a series of little paperbacks published by Wooden Books on topics such as Harmony, Sacred Geometry, Astronomy, etc. Now the publisher has rolled all these little books into one impressive textbook, the cover of which is reproduced on the right. I thought you'd like to know!

So that is the Quadrivium. But that is only four of the seven liberal arts. Maybe now we should turn our attention to the remaining three, the Trivium of grammar, logic and rhetoric. According to Hugh of Saint Victor, summarizing the tradition in the high Middle Ages, "Grammar is the knowledge of how to speak without error; dialectic is clear-sighted argument which separates the true from the false; rhetoric is the discipline of persuading to every suitable thing." The Quadrivium is about mathematical symbols and geometry (numbers and shapes), while the Trivium is about verbal symbols and the arts of language. The interest of educators in the Trivium and in the Classical Curriculum generally was fuelled by a famous essay of Dorothy Sayers called "The Lost Arts of Learning". (There is also a classic textbook on the subject by Sister Miriam Joseph). It is widely agreed that the skills of speaking, thinking, remembering, communicating and debating are endangered by a culture of instant electronic social networking, images and sound-bites. Yet if we cannot think for ourselves, what becomes of our freedom?
2 comments:

For a boy like me, growing up in England in the 1960s as part of the middle class, Look and Learn is a phrase to conjure with. It evokes whole worlds of imagination and knowledge. Look and Learn was a weekly educational magazine that was carefully built up over the years into a bound set of encyclopedias, each issue full of wonderfully informative and interesting stories and pictures. (This picture is used by kind permission.) Many of these educational treasures have since been reprinted in a limited number of volumes, but the whole archive is available on a web-site for the use of teachers and parents in the 21st century. Do go there and explore - I highly recommend it.

And while I am looking back, I may as well mention the other magazine I received each week - the Eagle, with its very English space-hero Dan Dare being the main attraction. The artwork and tone of the whole thing beat most other comics into the ground, and the artist Frank Hampson won all kinds of awards from the comic art community. There is a Dan Dare web-site where you can see a lot of what went on in this splended series.
1 comment: 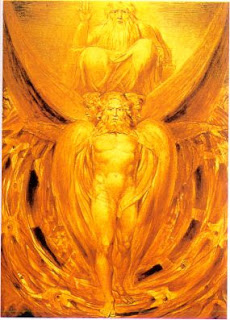 So Blake’s heathen mysticism was on the side of Christendom against the Orient. And thus Blake and St Thomas are agreed that “the highest dogma of the spiritual is to affirm the material”. Aquinas confirms Blake’s fundamental intuition that things are more real, not less real, than they appear to us. “And there is an upper world of what the Schoolman called Fruition, or Fulfilment, in which all this relative relativity becomes actuality; in which the trees burst into flower or the rockets into flame”.
3 comments:

Labels: Blake, Chesterton, mysticism
Newer Posts Older Posts Home
Subscribe to: Posts (Atom)
This is a blog by Stratford Caldecott for secondspring.co.uk. All rights are reserved. Click on the covers below for more information. For a list of all books by Stratford, go HERE. FOR STRATFORD'S OTHER BLOG GO HERE.