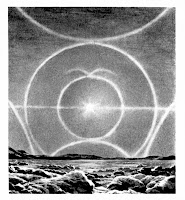 Cosmic order is rooted in the Logos. Today, mathematicians continue to discover truth through beauty, and modern science forgets the “poetic” qualities of nature at its peril. The idea of beauty contains the key to the healing of our fragmented, secularized, and alienated culture. This is how I summed up the thrust of the book at the end of the Introduction:

The way we educate is the way we pass on or transform our culture. It carries within it a message about our values, priorities and the way we structure the world. The fragmentation of education into disciplines teaches us that the world is made of bits we can use and consume as we choose. This fragmentation is a denial of ultimate meaning. Contemporary education therefore tends to the elimination of meaning – except in the sense of a meaning that we impose by force upon the world.

The keys to meaning are (and always have been) form, gestalt, beauty, interiority, relationship, radiance, and purpose. An education for meaning would therefore begin with an education in the perception of form. The “re-enchantment” of education would open our eyes to the meaning and beauty of the cosmos.

Education begins in the family and ends in the Trinity. Praise (of beauty), service (of goodness), and contemplation (of truth) are essential to the full expression of our humanity. The cosmos is liturgical by its very nature.

Mysterious inexhaustible depth
I have found in an article by Catherine Pickstock in the collection Radical Orthodoxy which she edited with John Milbank and Graham Ward, an essay entitled "Soul, City and Cosmos after Augustine", the following paragraph of which contains in concentrated form much that I am trying to say in this book. Speaking of the psyche as a "musical reality" she writes:

It is this notion which always held together what we now think of as sciences and arts, and ensured that the topics of the quadrivium always had a qualitative aesthetic dimension. To say that the essence of beauty is in number, as Augustine and, later, Bonaventure and a host of medieval followers do, sounds to us like an attempt to reduce aesthetics to science and formal rules. However, this would be to neglect the fact that for the tradition, number had a qualitative dimension and a mysterious inexhaustible depth. It was in fact the very break up of this tradition which generated the duality of science and art, along with a series of other dualities in which the modern West remains trapped.