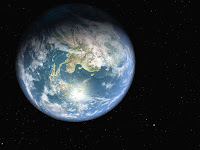 The word “ecology” was coined only as recently as 1873, by the German zoologist Ernst Haeckel. He based it on the Greek word oikos meaning “house, dwelling place, habitation” (plus, of course, logos). But though the scientific study of ecology, referring to the complex inter-relationships of biological entities with each other and with their environment, is a modern development, the traditional worldview has a great deal to say on the matter. The medievals did not possess posters showing the fragile earth floating in a dark sea of space, but they were deeply aware of the inter-relatedness of the natural world, and of man as the focus or nexus of that world, which they expressed in the doctrine of correspondences. It was, of course, more poetic than scientific in its formulation, but it expressed a profound insight that remains valid, and the present ecological crisis could only have developed in a world that has forgotten it, or forgotten to live by it. The cosmological principles underlying the quadrivium, even today, can help us learn to dwell more wisely in our common home.

James S. Taylor’s Poetic Knowledge: The Recovery of Education encapsulates the wisdom of the Integrated Humanities Program taught at the University of Kansas in the 1970s and 80s. Taylor writes, for example:

“The implications for education, especially for learning in the poetic mode, as a result of the Cartesian revolution should not be difficult to trace since modern education is dominated, in one way or another, by its influence. Any school of philosophy that claims that one particular science (mathematics and scientific method in the case of Descartes and his followers) must be applied to all other subjects of knowledge, will impose a formal rigor upon the entire curriculum, eliminating even the contemplative nature of mathematics and science. Sooner or later, it is all reduced to ‘facts.’ This approach bypasses the contemplative nature of knowledge, leaving the student disconnected from his nature and the nature out there.”

It is not Taylor’s conviction – and it is certainly not that of Beauty for Truth's Sake – that we can or should do without “rigor” in science or in education; just that we must keep things in right proportion. Contemplative, or poetic, or intuitive ways of knowing can give profound insights into reality. Any education that fails to integrate such knowledge is liable (as most of our schools demonstrate) to produce men and women alienated from their own full humanity and from nature itself.