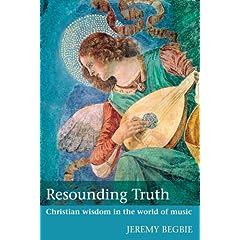 In Beauty for Truth's Sake I introduce the subject of music but for those who wish to go more deeply into it I recommend Jeremy Begbie's Resounding Truth (2007). You may also like to read an article in First Things by David P. Goldman, called "Sacred Music, Sacred Time". Goldman argues that there are objective criteria for achieving a musical form that raises our minds and hearts towards God:


Whether it is Bach or Mozart that we hear in church, we have a sense in either case of what Gloria Dei, the glory of God, means. The mystery of infinite beauty is there and enables us to experience the presence of God more truly and vividly than in many sermons,” wrote Benedict XVI in his book The Spirit of the Liturgy (2000). Simpler music can foster camaraderie among worshipers and even communal joy. Authentically sacred music does more: It inspires awe, even fear.


The question, of course, is what makes it possible for music to convey a sense of the sacred in the way that Benedict avers. And the answer should be sought first in our perception of time. Because we are mortal, and because all religion responds to mortality, our intimations of the sacred arise from our experience of the tension between the mortal existence of humankind and the eternal life of God. In revealed religion, God’s time stands in contrast to the earthly time of days and years and the corporeal time of pulse and respiration. A creator God who stands outside nature also stands outside time itself. Eternity is incommensurate with natural time. God made the world ex nihilo before time existed and he will bring it to an end....

Music unfolds in time. The rhythms of the music of all cultures arise from the natural rhythms of respiration and pulse. Unique to the tonal music of the West, however, is its capacity to create a perception of time on two distinct levels, that is, the natural time of systole and diastole, and the plastic time of tonal events. The coincidence or conflict of durational and tonal rhythm, that is, between metronome time and the pace of tonal motion, gives composers the tools to depict higher orders of time. That is what makes possible the sacred in music, for our perception of the sacred involves a transformation in our perception of time....

Music cannot represent eternity—no human artifice can—but it can direct the mind’s ear to the border line at which eternity breaks into temporality.... Tonality—the system in which the horizontal unfolding of melody in time integrates with vertical consonance—has the unique capacity to generate a sense of the future. Once musicians discovered how to link musical rhythm to the resolution of dissonance into consonance, Western music acquired a teleology. Every tonal work has a goal, the resolution of tonal tension in the return to the tonic by way of a final cadence from the dominant....

Western composers abandoned teleology in music at the same time they turned away from Christianity. Tonality enabled music to create deep expectations about the future. With the abandonment of tonality, listeners lost their map of the musical future, and found themselves trapped in a sort of Blind Man’s Bluff of a perpetual musical present. Churchgoers shunned twentieth-century composers as resolutely as they had embraced Bach or Mozart. As in other venues, churchgoers turned to popular music, the last bastion of the old tonality.

I wonder if tonality, "the system in which the horizontal unfolding of melody in time integrates with vertical consonance", has a particular affinity with Gothic architecture, which perhaps does something similar in space.