Cosmology of the Sacraments 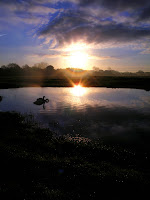 Sandro Magister's excellent website has reproduced one of the Pope's Easter homilies where he talks of the symbolism of the four sacramental elements (which correspond I suppose to the ancient "natural" elements of water, earth, fire and air). The Pope goes on to develop the link between oil and the priesthood. The whole thing is fascinating. Here is an extract:

There are four elements in creation on which the world of sacraments is built: water, bread, wine and olive oil. Water, as the basic element and fundamental condition of all life, is the essential sign of the act in which, through baptism, we become Christians and are born to new life. While water is the vital element everywhere, and thus represents the shared access of all people to rebirth as Christians, the other three elements belong to the culture of the Mediterranean region. In other words, they point towards the concrete historical environment in which Christianity emerged. God acted in a clearly defined place on the earth, he truly made history with men. On the one hand, these three elements are gifts of creation, and on the other, they also indicate the locality of the history of God with us. They are a synthesis between creation and history: gifts of God that always connect us to those parts of the world where God chose to act with us in historical time, where he chose to become one of us.