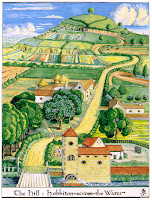 Here are some thoughts on the possible use of The Lord of the Rings by homeschoolers.

The first thing is not to impose the book as a lesson, but introduce it naturally at an early stage. Reading to a child every day, for example as part of a bed-time ritual that can start as soon as the child is capable of gazing at a picture, is the foundation of everything. (You know this already.) In the case of Tolkien, there are books that can be used much earlier than LoR – his Father Christmas Letters, Smith of Wootton Major, and of course The Hobbit – as well as dozens of books by other authors that can be read in conjunction with these, books by the other Inklings, traditional folklore from all over the world, and of course many wonderful passages from the Bible. It doesn’t matter that one is reading a book where the vocabulary is difficult – the meaning of a word can often be gleaned from context, although you should encourage questions and have a dictionary to hand.

When it comes to LoR, reading aloud continues to be important long after the child can read for himself. The sound of the words is important. Spend a bit of time getting the pronunciation of the Elvish words right (the Appendices contain some guidance) – something I never did. The magic is in the language, as Tolkien would be the first to tell you.

Once the story itself has come alive in the child’s imagination, and perhaps after it has been read more than once, it becomes possible to explore a range of topics suggested by the book. Let’s consider Language, Philosophy, Religion, Nature, Geography, History, Mythology, and Art.


First, Language. Many children try their hand at making up a secret language or code. Why not give them a helping hand, and use the game to teach them gradually about the basic rules and reasons for grammar and syntax, the possible use of word endings, and the shapes of letters? You could take a side-trip into the art of calligraphy, in which Tolkien was adept. Keep a good dictionary, and perhaps especially an etymological dictionary, to hand, and talk about the ways words have evolved. Often children’s spelling and also word-comprehension can be massively improved by paying a little attention to the composition of the words we use. It is, by the way, extremely helpful if a child can be taught to speak at least one other language while very young. It becomes much harder later on. Some children might like to try learning Elvish.

Philosophy. We are fortunate in having Peter Kreeft’s excellent book, The Philosophy of Tolkien, to refer to. This will open up the whole world of philosophical thought to anyone who loves the story. (Children, of course, are as much philosophers as anyone else, and more so than many adults, whose ability to wonder and to question has long since atrophied.)

Religion. As my own book, The Power of the Ring (the first English edition of which was called Secret Fire), pointed out, not to mention Joseph Pearce and many other authors, Tolkien’s work is permeated with religious themes and “atmosphere”. I don’t think it would be a good idea to treat LoR as a mere religious allegory and attempt to decode it – apart from anything else, this would be contrary to Tolkien’s intention (he had a “cordial dislike” of allegory). Rather the way to connect the book with Religion is by subtly directing attention to the plot, which illustrates the way Providence works in the real world, to the characters and how they develop virtues by struggling against temptations of various sorts, and to the moments when beauty reminds us of the transcendent. It should be possible also to talk about the way we find meaning in our own lives by answering the call to become a hero and following a quest of our own. Each of us is different, just as each member of the Fellowship of the Ring is different and has his own unique part to play. Our lives have a purpose, and we are part of a Great Story. But it might be better to let the book communicate these ideas in its own way and not turn them into a Lesson Plan.

Nature. Tolkien describes the natural word of Middle-earth with great love and attention to detail, so that one feels one has actually been there. You could examine his descriptions, study the flowers and plants and birds he refers to, and try to find places that remind you of parts of the book. Tolkien loved to go on walks in the countryside, and was always dawdling to look at the flowers and trees (unlike his walking companion C.S. Lewis, who liked to walk faster). Trying to draw or paint flowers or landscapes is the best way to get to know them.

Geography. Start with the maps. A fascination with maps and how to read and draw them will stand children in good stead later. Make similar maps of your own neighbourhood or places you visit. Pore over atlases of the real world, and try to see how Tolkien thought Middle-earth might have evolved into the Europe that we see today. Compare the maps of Middle-earth at the time of the War of the Ring with maps in some of Tolkien’s other, posthumously published works, of Beleriand and the other kingdoms in the earlier Ages. (The Encyclopedia of Arda might help.) Discuss how the forces of nature can gradually or suddenly reshape a landscape, raising or levelling mountains, drowning islands and plains, eroding new valleys. Convey something of the fascination of Dwarves with the “bones of the earth”, and if possible take your children to see some “glittering caves”.

History. LoR is about nothing if not history, and the “long defeat” of our exile from Eden, and the yearning for paradise which keeps us building civilizations, and our need for redemption (the “healing of Arda”, as it is called in The Silmarillion). To explore the history of Middle-earth using the Appendices, creating time charts and writing little essays on each of the invented cultures, might be a good way to get children interested in real history. With older kids you could look at what inspired Tolkien – the Anglo-Saxon culture, especially, and to some extent the Celtic. Connect Numenor with Atlantis, and read a bit of Plato.

Mythology. Here you have a golden opportunity to go on from LoR to the Norse and Icelandic sagas, and then to compare Tolkien’s “Ainur” (described in The Silmarillion) with the pantheons of gods not just in the Norse mythology but in Greek and Roman too. Read the tales of King Arthur and his knights, and the legend of Troy, which have so many echoes in LoR. Compare the creation story in The Silmarillion with those of other mythological traditions. Reflect with older children on the relation of mythology to truth – that these are not just failed attempts to explain the world scientifically, but contain poetic insights into truth, and a kind of symbolic metaphysics.

Finally, Art. There are numerous examples of drawings and paintings in different styles inspired by Tolkien’s writing, so it would be easy to look at these and develop an interesting Art class. Tolkien himself illustrated many of the events and scenes in the books, and even designed colourful heraldic designs for the different Elvish “houses” or families. Why not show these, and encourage children to design similar symbols for their own family and friends? Move on from there to look at heraldry and coats of arms, used not only in feudal Europe but in the modern Church. This can help to awaken an appreciation of symbolism, as well as a sense of colour and design (as well as connecting back to History).

I hope these sketchy hints are of some use. Do feel free to comment or submit other ideas. These are just initial thoughts, but I hope to include a more developed version of this essay in my new book eventually.