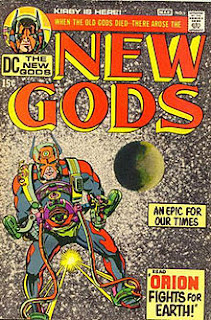 … Stand up and keep your childishness:
Read all the pedants’ screeds and strictures;
But don’t believe in anything
That can’t be told in coloured pictures.

Chesterton would not have liked many of the stories told in coloured pictures by American comic books, which these days tend to dystopia and sado-eroticism – an all-too predictable reflection of the present state of our culture. But some he would have liked, and I dare to think I could show him my own comic collection without (much) embarrassment.

My personal golden age of comics was in the late 60s and 1970s, when I would roam the streets of London looking for the latest American imports: Batman or Green Lantern, The Fantastic Four or The Mighty Thor, and a dozen other titles, illustrated by such artists as Neal Adams, the Buscema
brothers, Jack “King” Kirby, or Jim Steranko. Kirby it was who, in partnership with Stan “the Man” Lee, gave us most of the great Marvel heroes, including the Hulk, Thor, Captain America, and the Silver Surfer, and his heavily emblematic and dynamic style influenced generations of later artists. A quick scurry through Marvel-related entries in Wikipedia will explain what I am talking about, if you don’t already know. You’ll find plenty of coloured pictures, too.

True, nearly all the comics I’m talking about featured punch-ups between costumed heroes and villains, and yes, there was an assortment of buxom females in tight costumes, but the appeal of the comics went deeper than that. It was the brilliance of the artistry (despite the muddy inks on cheap paper), and the way the caped crusaders tapped into archetypal, almost mythic stories, not the display of anatomy, that appealed most to me. Honestly, it was. Kirby in particular mined ancient mythology without apology to construct pantheon after pantheon of super-powered beings, ending up (at Marvel’s rival DC, publisher of Superman and Batman) with a race explicitly called the New Gods.

Superman, the progenitor of all these characters (eventually Kirby got to draw him too), was Samson and Hercules in coloured tights. After his debut in Action Comics in 1938, it didn’t take him long to become a cultural icon. If the “superman” of Nietzsche transcended conventional morality, Jerry Siegel and Joe Schuster’s Superman, adopted refugee from the planet Krypton and avowed defender of peace, justice, and the earth itself, accepted and upheld the moral code taught by his adopted parents in Smallville, Martha and Jonathan Kent. Right up to today, he is one of the few superheroes who remain relatively untainted by moral compromise. He doesn’t even kill; he puts villains in jail. 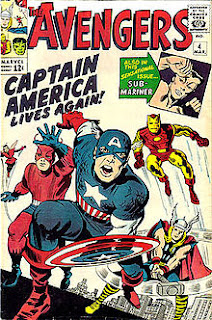 It has taken until now for CGI to catch up with the comics. The new wave of superhero movies, especially those from the Marvel studio, boast special effects that make the earlier Superman films starring Christopher Reeve look like vintage episodes of Doctor Who, with monsters of cardboard and cellophane. One film in particular, the recent Avengers film (titled Avengers Assemble in the UK), is widely described as the superhero film that comic fans have been waiting decades to see. Anyone who sneers at it has simply never enjoyed a comic book. Up until now, superhero films have focused on one hero at a time; now the movies can do what has long delighted the fans of the comic: create teams of heroes and villains, and crossovers between one comic-book franchise and another. “The Avengers is what we call ourselves. Earth’s mightiest heroes type thing,” explains the billionaire genius philanthropist Tony Stark (a.k.a. Iron Man) to the villainous Asgardian god Loki, moments before being thrown through a skyscraper window.

The Avengers are assembled by Nick Fury (Samuel L. Jackson), Director of the secret agency S.H.I.E.L.D., with the aim of defending the earth against the alien army commanded by Thor’s brother. They include Captain America (Marvel’s moral equivalent to the early Superman), Iron Man (billionaire inventor in a flying suit), the Hulk (Bruce Banner, a scientist who bulks up big and green when angry), the god of thunder on assignment from Asgard, and two normal humans with heightened abilities, Hawkeye (archer with trick arrows) and Black Widow (former Russian spy and martial arts expert). The first half of the film shows our heroes squabbling, but the self-sacrificing example of a secondary (human) character, Agent Coulson, gives them the “push” they need to become a team capable of setting their egos aside and saving the world – represented, of course, mainly by Manhattan.

“There is only one God, Ma’m, and I’m pretty sure he doesn’t dress like that,” quips Captain America, in reference to the Asgardians. The line is a suitable one from the “old fashioned” Captain, who last saw action in World War Two (against a much worse villain than Hitler) and has only recently been thawed out of the polar ice where he was buried after saving the world the last time round. But, as Coulson says, “the world needs a bit of ‘old-fashioned’.”

We all need guardian angels. In fact the Catholic Church teaches that we each have one – a supernatural entity assigned at conception, not to dominate us, but to prevent us being dominated; to defend us against our supernatural enemies, giving us the space to live our human lives in a world that is much bigger and scarier than we think (what the Rangers do for the Shire in The Lord of the Rings). Comic-book superheroes and supervillains are the angels and demons of this cosmic spiritual warfare reinvented for the secular imagination, and they resonate with us because on some level we know that we need them. At the same time, they give us something to aspire to (the corresponding Christian doctrine is theosis or divinization by grace). These are not all protectors sent to us from outside – like the boy from Krypton, or Thor – more often they are ordinary human beings (Peter Parker, Bruce Wayne, Tony Stark, Hal Jordan) who by providential accident or brilliant design find themselves possessed of a power beyond the lot of mortals. And “with great power comes great responsibility”, as they quickly learn. These are flawed human beings who have to become heroes, fighting alongside the guardian angels for the right of human beings to live a meaningful life. (“I have come to set them free,” says Loki. “Free from what?” asks Fury. “Freedom,” comes the reply.) 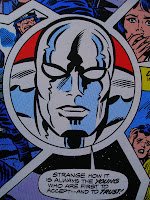 The story that these “coloured pictures” are trying to tell us is certainly old-fashioned enough, but we never tire of hearing it. It is, as Chesterton would say, a fairy tale that holds more wisdom than most modern novels. Good and evil are real, and we define our identity and free our souls by becoming identified with the good.  Heroes are not made by a burst of gamma radiation or a fancy metal suit; they are forged in a moral struggle, and the true hero is the one who is prepared to give his life to save others. And there is another way in which the coloured pictures tell the truth. Alien hordes and false gods are out there, waiting for their chance; waiting for someone to open the door to them. There is a spiritual battle going on all around us, and everyday life is part of something much bigger, something cosmic. Avengers, assemble!