The question of purpose 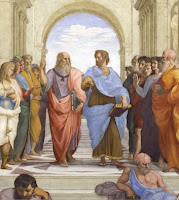 Our society, indeed what remains of Western civilization, seems to many people to be falling apart. The economic crisis, the moral crisis, the ecological crisis, and the political crisis combine to create a “perfect storm”. But they all stem from one fundamental error. As a society, we have abandoned a sense of cosmic and moral order for the sake of unlimited growth and progress towards an entirely man-made universe.

A similar process underlies another crisis, the fifth crisis, that of education. It has the same root as the others. Education is in crisis not merely because standards of literacy or mathematics have fallen, but because we have no coherent vision, as a society, of what education is for or what it is meant to achieve. We have assumed that, if it is not merely a cage to keep our young people off the streets, its purpose is to train workers in the great economic machine, the same machine that we hope will produce endless growth. But we cannot know what education is for, since we have no idea any longer what man is for, or what a human being actually is.

As Frank Sheed once put it: “This question of purpose is a point overlooked in most educational discussions, yet it is quite primary. How can you fit a man’s mind for living if you do not know what the purpose of man’s life is?” We need a philosophy of education based on an adequate “anthropology” or picture of man, if we are to put education back on the right track.

The Catholic tradition – and more broadly the great tradition of Western civilization – defined humane learning in terms of what became known as the “Liberal Arts”. As described by St Augustine and others, these consisted of seven fields of study, grouped as three arts of language, and three cosmological arts. The first group or Trivium consisted of Grammar, Dialectic, and Rhetoric; the second, the Quadrivium, of Arithmetic, Geometry, Music and Astronomy. Both sets of arts were intended to be preparatory to the higher studies of Philosophy and Theology – that is, the love of Wisdom (philo-sophia) and the knowledge of God (theo-logos).


The Liberal Arts consituted the core curriculum at the heart of the classical and medieval educational system. I have been investigating them in two books devoted to the Quadrivium and the Trivium – Beauty for Truth’s Sake and Beauty in the Word respectively – to discover their relevance, if any, to our present educational crisis. This article is an attempt to summarize the conclusions of the two books.

There is, of course, an obvious objection to any attempt to revive this tradition today. Science has moved on since the Middle Ages. The world has changed. Why are these seven particular fields of study still of interest to us? How can we we fit other important topics like Biology, History, Geography, Sociology, Computer Studies, and the rest, into such a narrow frame? Why should we even try?

It is of course true that many things have changed. Certainly our view of the world and of ourselves has changed radically. Nevertheless, the actual world and our own nature remain what they were, and the ancient categories are still important. In the case of the Trivium, even at a superficial level it is clear that the knowledge of how languages work, how to think clearly, and how to persuade others, are all skills that are as relevant today as ever. Adding Latin and English grammar, and some training in the principles of logic and eloquence, not to mention some Great Books, to the curriculum of our modern schools would be a great idea. But the Trivium has much deeper foundations than this, as do the Liberal Arts in general.

Awakening (Trivium)
“Grammar” goes to the very root of our existence, the source of our being. In Caritas in Veritate Pope Benedict writes of the grammar of creation “which sets forth ends and criteria for its wise use, not its reckless exploitation” (48). In his Message for the World Day of Peace in 2007 he writes of a transcendent “grammar” inscribed on human consciences or on the human heart, “in which the wise plan of God is reflected”. And writing before his election as Pope he looked to Plato to help him understand this phenomenon of conscience as “something like an original memory of the good and true (the two are identical),” and therefore as an “anamnesis [reminiscence] of the Creator” (see his book On Conscience).

Grammar is not just the rules of language, but the first gift of humanity, the connection to our Origin through memory, language, and tradition. In the book I connect it with the Greek term Mythos, and the concept of telling stories to define our identity, or that of our nation and tribe. The word “grammar” was for a long time associated also with the making of magic, for with Grammar we are dealing with the deepest roots of our existence. Adam naming the animals was the first Grammarian.

With Dialectic we move from Mythos to Logos, consciously searching for the reason of things. This is the art of discerning and uncovering the truth, of distinguishing between imagination and reality. Plato’s dialogues mark the emergence of the dialectical method in its full scope, the transition from a poetic truth evoked or symbolically expressed by story and poetry into the clarity and precision of logical thought. But we need to maintain the link to the poetic consciousness – this is perhaps why Plato, even as he argued for the banishment of the artists, did so in artistic form, expressing himself through imaginative drama.

The third member of the Trivium, Rhetoric, has to do the movement from Mythos and Logos to Ethos. Far from being concerned just with the rules of eloquence, it is about the communication of souls at the level of the heart (“heart speaks to heart”), and so with the creation of community. This is more than a matter of knowing the right words. It is the art of communion, of making harmony, of bringing disparate voices into one song. The truth or Logos of the world can be communicated only in love. And until it is communicated it is not completely known.

Thus the three arts of language consisted in the reminiscence of being through Grammar, the unveiling of truth through Dialectic, and the communication of understanding through Rhetoric. With these three foundations in mind, we can begin to reconceive the curriculum of the school. The subjects we choose to teach may be very different from those studied in the Middle Ages, but that is not important. The Trivium is about the foundations on which education is built, the deeper skills that make us human, the real skills our education is supposed to bring out in us. Whatever we teach, whether it is spelling or geography, history or chemistry, we have to do it in a way that enables our humanity to grow through remembering (being), thinking (truth), and communicating (love).

Re-enchantment (Quadrivium)
Beauty for Truth’s Sake is about the Quadrivium. These four subjects are not merely “mathematical” studies in contrast to the “literary” ones. If they were, we would merely be replicating the modern divorce of science from the humanities. They are about the continued search, on the basis just established, for the Logos or Intelligibility of things.

Each member of the Quadrivium involves the study of patterns in space or time, leading to knowledge of the underlying Wisdom of the Creator expressed in the creation. This, of course, is the origin of the scientific enterprise, but it is equally the origin of art. Both are ways of discerning the Logos. Art exercises the imagination, and so in another way does science, where every major discovery has involved a creative leap. The artist searches for beauty, and so do the scientist and mathematician.

The gulf between arts and sciences, which many have remarked and debated, is not unconnected with the gulf that opened up in modern civilization between faith and reason, though they are not at all the same thing. The “reason” that can be separated from faith is a reason that is curtailed, stunted, closed to the possibility of the transcendent and so of beauty.

As I write in the book, the divorce of faith from reason led to the subordination either of faith to reason (in modernism, positivism, etc.) or of reason to faith (in the various forms of fideism and extreme biblical fundamentalism). But the seeds of the divorce lay in its reduction of reason to discursive thinking alone. Cognition has been afflicted by the same forces that afflict our freedom, and so in order to bring reason and faith together again we must understand both differently, situating them in a richer, deeper, three-dimensional world. We must understand that faith is not blind, but is a light that enables us to see even the natural world more clearly. And we must understand that reason is naturally open to God and in need of God. If we close it off to the transcendent, we do violence to its nature.

Faith is not opposed to reason, but it does function as a constant goad, a challenge, a provocation to reason. Faith claims to stand beyond reason, to speak from the place that reason seeks. But it does not claim to understand what it knows, and it should not usurp the role of reason in that sense, any more than it should contradict it.


Conclusion
The quest for the Logos is the quest for truth, beauty, and goodness. This is the search of the human heart for what it needs to flourish and be happy. And it is the only adequate basis for a philosophy of education. With its help we can construct a framework in which every type of human enquiry finds a place, losing sight neither of the way all subjects ultimately connect together, nor of the nature and needs of the human person who is the subject of education. Rather than fit the child to the Procrustean bed of economics, we fit our educational systems to the nature of the child, whose meaning and purpose transcend that of the economic machine.

Our modern curriculum is fragmented or shattered into a thousand glittering shards. The secret of their unity lies in the Logos that is the principle of unity both for the world and for the human person – for the breaking of the curriculum reflects the brokenness of the person who is the very subject of education itself.