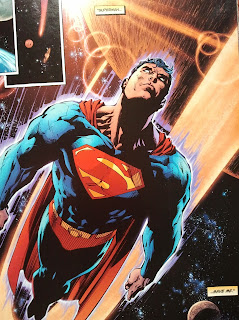 Superman is the most consistently "moral" hero in the DC universe. The contrast with Batman is often made. The Man of Steel never lies, never kills the innocent – nor even the guilty, except super-villains in the defence of Earth. He is not a vigilante, or a soldier; more a policeman. He is always willing to sacrifice himself for others. He is just as heroic when stripped of his superpowers, as happens from time to time. In the comic series he has died and been reborn (it's complicated). In this frame the words in the little yellow boxes read "Superman – save me." Superman is rushing across the universe to answer a plea for help that turns out to come from another DC hero, Green Lantern. The director of the
new film, Zack Snyder, was reluctant to modify this "saviour" aspect of the Man of Steel. "I think as soon as you start to work on him it's going to be muddy and weird. There's a pure thing inside of the Superman character."

In the movie, Henry Cavill does a wonderful job of representing this purity and goodness in the person of Clark Kent/ Kal-El. He even stops by a church seeking the advice of a priest. He hands himself over to General Zod in hope of saving mankind. But there is more. His father has imprinted the genetic "codex" of his entire people into the cells of his body, so in a sense Kal is an Adam figure – a "universal man". By serving as a hero on earth, he is redeeming Krypton. And we learn that Krypton was destroyed through some kind of sin against natural law: its "core was destabilized" after it had turned to artificial reproduction. Kal was the first natural birth for centuries, a symbol of the ancient and natural way of doing things. Instead of being programmed, his father believed that he should be free to make his own destiny.

The salvation Superman offers is, of course, nothing like that offered by Jesus. Superman can only rescue us from physical danger, or from some evil dictator. We are all going to die eventually: the question is what happens then. Jesus died on the Cross so that by joining ourselves to him we could journey through our own deaths to resurrection in him. And that resurrection is not simply a spiritual state but a new body, a body akin to the one he showed the Apostles, capable of appearing anywhere, impervious to harm, no longer subject even to the law of gravity. A body akin, in some ways, to that of Superman himself. Superman's job is to remind us of what we can become.