Chesterton is often thought of as an amusing journalist and man of letters, a literary critic and novelist, but he was many other things besides – among them an artist, a poet, a playwright, a philosopher, and a theologian. Gilson praised him as a Thomist, while Ian Ker regards him as the worthy successor to Newman as Christian apologist. A new book called G.K. Chesterton, London, and Modernity presents him as a sophisticated commentator on the urban environment. His views on modernity and on reality itself have been widely quoted, and he is an influence on a surprisingly wide range of thinkers, such as Marshall McLuhan, Ivan Illich, Antonio Gramsci, Rene Girard, S.R.L. Clark, Slavoj Zizek and John and Alison Milbank.

So what was his critique of modernity, and what was the alternative he proposed?


First, here is a passage that will evoke a snort from Neoconservatives. “It cannot be too often repeated that what destroyed the Family in the modern world was Capitalism. No doubt it might have been Communism, if
Communism had ever had a chance, outside that semi-Mongolian wilderness where it actually flourishes. But so far as we are concerned, what has broken up households and encouraged divorces, and treated the old domestic virtues with more and more open contempt, is the epoch and power of Capitalism.”

He went on: “It is Capitalism that has forced a moral feud and a commercial competition between the sexes; that has destroyed the influence of the parent in favor of the influence of the employer; that has driven men from their homes to look for jobs; that has forced them to live near their factories or their firms instead of near their families; and, above all, that has encouraged for commercial reasons, a parade of publicity and garish novelty, which is in its nature the death of all that was called dignity and modesty by our mothers and fathers” (from Chesterton’s “The Three Foes of the Family” in The Common Man). 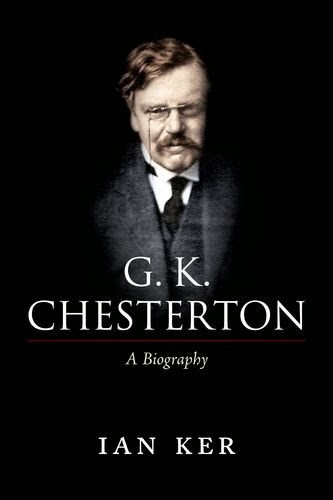 Then there is the following appeal on behalf of human intelligence. “Just as one generation could prevent the very existence of the next generation, by all entering a monastery or jumping into the sea, so one set of thinkers can in some degree prevent further thinking by teaching the next generation that there is no validity in any human thought… It is idle to talk always of the alternative of reason and faith. Reason is itself a matter of faith. It is an act of faith to assert that our thoughts have any relation to reality at all…. There is a thought that stops thought. That is the only thought that ought to be stopped. That is the ultimate evil against which all religious authority was aimed. It only appears at the end of decadent ages like our own” (Chesterton in Orthodoxy).

To this we might add two general, rather impressionistic but penetrating views of what is wrong with the modern world. “We are certainly not getting the most individual or the most interesting qualities out of men. And it is doubtful whether we ever shall, until we shut off this deafening din of megaphones that drowns their voices, this deathly glare of limelight which kills the colours of their complexions, this plangent yell of platitudes which stuns and stops their minds. All this sort of thing is killing thoughts as they grow, as a great white death ray might kill plants as they grow” (from Chesterton’s “The Holiday of the Slave” in The Outline of Sanity).

The second of this pair is one of my favourite passages. “The coming peril is the intellectual, educational, psychological and artistic overproduction, which, equally with economic overproduction, threatens the wellbeing of contemporary civilisation. People are inundated, blinded, deafened, and mentally paralysed by a flood of vulgar and tasteless externals, leaving them no time for leisure, thought, or creation from within themselves” (Chesterton speaking in Toronto in 1930).

In these almost quotations we see a man of powerful vision and an intuitive, well-informed understanding of history casually putting his finger on some key points about modernity. In the first, the stage is being set for the proposal of Distributism – by which I mean a more humane economy, on a human scale and based on the extended family. 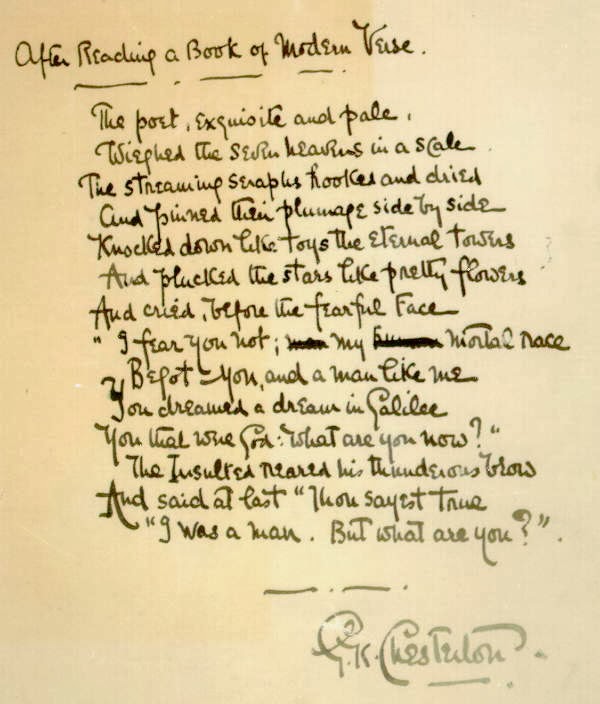 In the second, Chesterton defends the human mind against what Pope Benedict XVI famously described as the “tyranny of relativism”. He sees the danger at the heart of modernity, which is the separation of reason from faith, and behind this of nature from the supernatural, leading to the latter being completely sidelined (see John Paul II, Fides et Ratio). As Chesterton writes in The Thing, “all human beings, without any exception whatever, were specially made, were shaped and pointed like shining arrows, for the end of hitting the mark of Beatitude.” Nature was made for grace.

In the third and fourth of my extracts, he points to the debilitating effects of a technological environment on human beings that can only flourish organically, and further insists on the need to develop an interior spiritual and creative life if we are to be fully human.

Chesterton recognized that heart and hearth, work and worth, are all of a piece. Human flourishing is found in families, human wholeness in holiness. Civilization depends on faith – faith both in the transcendent horizon that many call God, but also faith in reason, and in the ability of human intelligence to grasp objective truth. Man is a paradox – a partly supernatural animal – and he possesses both an inside and an outside. Of these two, the inside is the most important, for it opens towards the infinite. But modernity – ever since the “masters of suspicion”, Darwin, Marx and Freud, accomplished their work – suppresses and denies the interior, reducing man to an animal or economic unit driven entirely by physical desires. 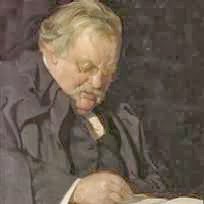 Chesterton had a pretty fair grasp of where this unique and potentially lethal civilization we call “modernity” came from. It grew in the ruins of Christendom and nourished itself on what was left of the Gothic civilization. Again in The Thing (one of his most useful books on this topic) he writes: “The fact is this: that the modern world, with its modern movements, is living on its Catholic capital. It is using, and using up, the truths that remain to it out of the old treasury of Christendom; including, of course, many truths known to pagan antiquity but crystallized in Christendom.”

The forces of destruction were several. Henry VIII was one, with his dissolution of monasteries dedicated to three vital things: prayer and the interior life, the wise cultivation of the land, and hospitality to the poor. The liberation of capital by the Dissolution made possible the Industrial Revolution, while at the same time creating a class of exploited workers that cried out for Communism. Meanwhile the Reformation stemming from Martin Luther’s campaign against the Catholic Church led to the destruction of philosophic realism that was the only secure foundation for human reason. It also led to a rising mood of individualism that drew to itself the humanism of the Renaissance and expanded across the world in the Age of Exploration, which soon turned into an age of colonialism, slavery, and genocide.

Chesterton lived long enough to see the First World War but not the Second, but it was the First that marked the end of the Edwardian era and the beginning of modernity. This was a war of machines, of guns and tanks and poison gas and bombers. Tolkien described it as the “Fall of Gondolin”, having survived – as Chesterton’s brother did not – a brief time in the trenches. GKC lived into the interwar period, and with his prophetic instinct saw emerging a “coming peril” more dangerous than any earthly dictator – a civilization based on an ever more intense cycle of production and consumption, destroying all hope of an interior life. We call this consumerism, or a consumerist society, a society built on economic growth measured in such a deceptive fashion that it appears to be both successful and inevitable. Until the Crash. This is a society built on usury, on credit and debt – and it is now global, so there can be no escape from it.

Chesterton also saw that the next great heresy to undermine civilized existence “is going to be simply an attack on morality; and especially on sexual morality. And it is coming, not from a few Socialists surviving from the Fabian Society, but from the living exultant energy of the rich resolved to enjoy themselves at last, with neither Popery not Puritanism not Socialism to hold them back…. The madness of tomorrow is not in Moscow, but much more in Manhattan” (G.K.’s Weekly, June 19, 1926). If man is an animal with no supernatural dimension or purpose, then entertainment can be his highest expectation, if he can afford it, and sexual indulgence being the most exciting form of entertainment, the present slide into decadence is equally predictable.

These insights of Chesterton’s were voiced in the 1920s and 30s, but did nothing to prevent the evils that he saw coming about. Of course, his was not the only voice crying in the wilderness. Prophets are people we admire after they are dead. But Chesterton’s insights are still valid, and require our attention. There are suggestions in his writings as to how we might start to plant the seeds of a new civilization – one that will grow and flourish in the ruins of the crash to come. It would be based on common sense that is no longer common, on philosophic realism rather than relativism, on personalism rather than individualism, on the importance of the family and chastity, on respect for nature instead of short-term exploitation, on tradition, religious freedom, respect for life, and the common good.