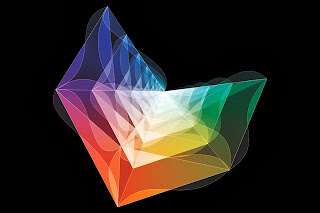 Quanta magazine reports that "physicists have discovered a jewel-like geometric object, the Amplituhedron, that dramatically simplifies calculations of particle interactions and challenges the notion that space and time are fundamental components of reality. The revelation that particle interactions, the most basic events in nature, may be consequences of geometry significantly advances a decades-long effort to reformulate quantum field theory, the body of laws describing elementary particles and their interactions. The new geometric version of quantum field theory could also facilitate the search for a theory of quantum gravity that would seamlessly connect the large- and small-scale pictures of the universe. Attempts thus far to incorporate gravity into the laws of physics at the quantum scale have run up against nonsensical infinities and deep paradoxes. The amplituhedron, or a similar geometric object, could help by removing two deeply rooted principles of physics: locality and unitarity." (Abridged from the Quanta report by Natalie Walchover. With thanks to Ben Olsen. For mention of a previous attempt to locate the underlying structures of physics in geometry by Dr Garrett Lisi go here.)