The imagination of the child is very powerful, and sometimes we can still recall the mystery with which it invested the pages of the comic books we devoured when young. There is an atmosphere, a richness, a whole universe associated with those now dulled and faded inks on cheap paper, as the fragrance of our childhood wafts from the page for a moment.

What did I see in them all those years ago? It is gone almost before I can ask the question. Yet it was something beautiful, uplifting, intriguing, amusing, enriching. Maybe even the artists and the writers don't have it any more, and maybe they – as adults – are trying to recapture it for themselves.

For me it was Dan Dare to begin with, the very "R.A.F." hero developed by Frank Hampson, who started life as a chaplain to the Interplanetary Patrol before being successfully relaunched as chief pilot of Earth's Space Fleet. Later I prowled the streets looking for American superhero comics, beginning with Batman and moving on to Marvel, where fantasy and humour were fully alive, thanks to the fun-loving personality of Stan Lee ("Nuff said"). I have
written about all this before. 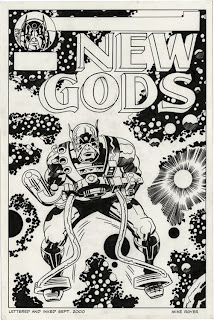 The greatest dynamic artist of the comics was Jack Kirby (d. 1994), their greatest draftsman Neal Adams. Reading these comics changed the way I looked at the world, saw shadows, perceived colour and movement. Kirby (the "William Blake of comics") was interested in gods, and raided the pantheons of many cultures including the Norse and the Greek before creating his own "New Gods" and "Forever People", "Eternals" and "Celestials". The costumes and the characters merged – each costume an emblem, almost a kind of heraldry. These were people representing something the archetypal, elemental forces of nature and human personality. The original Fantastic Four were earth, air, fire, and water, their arch-nemesis the technologically enhanced but humanly ruined Doctor Doom (a model for George Lucas's Darth Vader), their unpredictable ally, the Silver Surfer, representing the energies of the cosmos as a whole. Kirby's instincts were sound. 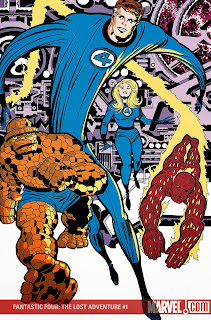 The new wave of interest in superheroes, fuelled by the coming-of-age of CGI in cinemas and the need for blockbuster appeal, is a mixed blessing, of course. The movies that succeed manage to be iconic, fast, and humorous. Robert Downey Jr's Iron Man is all these things, which is why he is currently worth his weight in gold. But this brings us to the real point. So far I have said much of this already, and have repeated it here mainly to have an excuse for showing some more of the gorgeous artwork – so much better than the boring frames copied by Roy Liechtenstein and turned into fine art in the 1960s.

In search of the winning formula for a successful blockbusting movie, the producers, for all their lack of imagination, have stumbled on the true archetypal conflict of our time – not just the conflict between Good and Evil, but the conflict between Man and Machine. It is the same battle that goes on in The Lord of the Rings around the Ring as "Machine", and in Kafka where the Machine is a bureaucracy, and in the Terminator movies, and so on. But it also goes on in real-life labs and abortuaries.

In SF and comics, the human imagination is free to run wild – to explore what we really want to have and to achieve as human beings. The present generation of scientists and nerds grew up on Star Trek and set about making those beloved technologies real. The same is happening with Tony Stark's gadgets today. At the end of Iron Man 3, having destroyed his own inventions, Tony bends down and picks up a screwdriver. Whether he is wearing the suit or not, "I am Iron Man," he admits. These stories form part of our process of self-invention, and at the same time (if there is to be a real story) they enable us to explore the peril of our humanity in this new world, perhaps even to rediscover that humanity, as Tony does with his engineer friend in the first movie, his girlfriend in the second, and a little boy in the third.

"Nobody's a nobody," says Agent Coulson in the TV series Marvel's Agents of S.H.I.E.L.D. Nobody is to be used, exploited, or discarded. We are here to become more human, not to become all-powerful. Moral choices, and ultimately acts of compassion and love, are the only way to find meaning and joy. But the big debate worth noting in all this, discussed in Humanum recently, is about ends and means. Is technology just a screwdriver, just a tool, neutral in itself, that we pick up and use, or does it change us? Does the new tech, for example, by breaking the world down into bits of information and reassembling these into simulacra, render us less free to think in terms of wholes and natural ends – making us, in a sense, much less inclined to contemplation and more to action, to subordinate all matter to human desire? Is an alternative technology even possible? That may be to stretch our imaginations even further than the comics can reach.