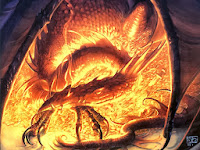 Here is an interview I did for a Spanish conference on Lewis and Tolkien scheduled for 2014.

Q: How can your book The Power of the Ring help us to prepare for our cinema experience with the forthcoming film The Hobbit II: The Desolation of Smaug?

A (Stratford): Obviously the film can be enjoyed simply as an adventure or action movie, with lots of fighting, magic, monsters, and heroic deeds. In that sense it is not essential to read about the film or the book before going to the cinema. But my book is designed to explore the deeper meanings of the story and the intentions of J.R.R. Tolkien in writing it. These meanings and intentions add another layer of interest and enjoyment to the story. Unless you know them you will miss some of the pleasure you might have had in viewing the film.

My book aims to explain why Tolkien’s “Middle-earth” – the imaginary world in which the story is set – is relevant to us today. Tolkien created Middle-earth out of real-life places and experiences. His vivid descriptions of nature, which inspired Peter Jackson to design the world of the movie, draw on real life but help us to look at the world in a new way, with a keener appreciation of its beautiful qualities and a stronger love of nature. In the 1960s Tolkien’s writing even helped to inspire the ecology movement.

But there are many other ways in which Middle-earth throws light on the real world. For example, Tolkien was very concerned with the crisis in modernity caused by the development of technology and our over-reliance on it. The “Ring” and dark magic in general represents all the various types of machinery with which we try to control the world – often polluting it in the process – and force others to do our will. Most importantly of all, the tale of the Hobbit is about the transformation of a personality. Bilbo represents “Everyman” – that is to say, you and me – in a journey from a rather boring complacency to a much higher state of being, a state that Tolkien himself refers to as “nobility of spirit”. By this he means the possibility of heroism, a preparedness to sacrifice oneself and one’s own gain for the sake of others, as Bilbo is willing to do by the end of the story.

A fairy tale, like The Hobbit, as Tolkien well knew, is more than an entertainment. It contains a moral lesson – or many such lessons. G.K. Chesterton once said that "Fairy tales are more than true: not because they tell us that dragons exist, but because they tell us that dragons can be beaten" (Orthodoxy, 1908). In the same way, the various dangers that the Hobbit and the Dwarves meet along the way to the Lonely Mountain, including the Orcs of the mountains and the giant spiders of Mirkwood,
represent the darkness and fear within ourselves that we have to overcome if we are to become “heroes” in the context of our own lives.

Q: What´s your opinion about the previous film, The Hobbit I: An Unexpected Journey? How can we get deeper messages from this film with the book The Power of the Ring? 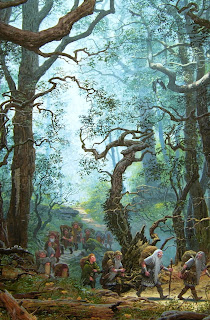 A: Tolkien wrote the entire book as one continuous narrative, but Peter Jackson has divided it into three parts. The first part is mainly about beginnings – about summoning the courage to begin the great adventure, leaving the Shire to go off into the wilderness, crossing the mountains and the forest. In a sense, I suppose, the Trolls represent the lower nature that has to be overcome before the hero’s journey can continue, while the Elves of Rivendell give us a glimpse of the higher nature – the world of spiritual beauty – that draws the hero on towards the goal of the Quest. Gollum is the “shadow self” of the hero, another image of what he needs to overcome in himself, or what he might become if he remains trapped in his old existence, dominated by selfishness and greed. Gandalf is the “wise old man” who appears in many tales to initiate the hero, to send him on his way. The rune he scratches on Bilbo’s front door to enable the Dwarves to find him represents the “secret name” that the Hobbit must eventually live up to, by fulfilling his destiny as the good thief. The first film ends with an escape through the air, carried by Eagles, symbolizing his victory over the initial obstacles on his way.

But what my book tries to do is not so much “psychoanalyse” the story (even if one of my appendices does offer a Jungian interpretation of The Lord of the Rings) as to show how it fits within the larger narrative of Middle-earth, The Silmarillion, a cycle of mythological tales going back to the birth of time itself.

Tolkien started writing these stories well before the First World War, and The Hobbit was written in the inter-war years. It had a lot of time to grow and mature in Tolkien’s subconscious before it found its final form. Every element in the story, from the Ring to the Arkenstone, from the Dragon to the spiders, has a deeper resonance for us if we know that deeper meaning, and is enriched by knowing its context in the mythology as a whole. The Arkenstone, for example, goes back to one of the earliest elements in the mythology, the Silmarils, and the Mirkwood spiders go back to the giant spider Ungoliant who allied herself with the Dark Lord Morgoth as the enemy and devourer of Light. Smaug goes back to the Dragon in one of Tolkien’s favourite sagas, Beowulf. The Wizards, such as Gandalf, Saruman, and Radagast, come from the Far West as protectors of certain regions or aspects of Middle-earth. They are guardian angels in disguise. Like real angels in Christian doctrine, they don’t try to do everything themselves, but try to encourage and inspire the mortals in their charge.

You need to know the background to enjoy the full richness of the story. But the book, I believe, is much better than the film. I regret that many people will never read the story as Tolkien wrote it. By reading my book – and, much better, by reading the works of Tolkien himself – you will see the great scope and beauty of the world that Tolkien spent his whole life developing and refining. He did this not just in order to entertain us, but to leave us a vision of truth, goodness, and beauty that would change our lives for the better. My book may help to explain this further. I hope that it will at least encourage those who read it to read Tolkien’s original novel and not rest content with seeing the film!

Q: What’s the most important spiritual message that we can find in The Hobbit, both book and film? 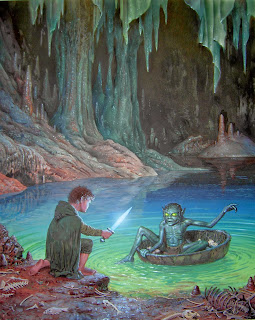 A: I would say it is a lesson about overcoming certain dark forces in ourselves, especially greed – the desire for comfort, wealth, treasure, status. In order to be truly at home and happy we need to overcome greed and complacency. Bilbo, who at the start is very comfortable and self-satisfied (like most Hobbits), is shaken out of this trap by Gandalf and gradually transformed by his adventures. He acquires virtues such as courage and kindliness. (For example, if you compare the riddle-game he plays with the Dragon in the darkness of the Lonely Mountain with the game he plays with Gollum under the Misty Mountains, you can see how he has developed as a personality, able to act by his own choice and not just blindly or when forced to do so by necessity.) Contrast Thorin, who is completely taken over by greed, and who only manages to overcome his lust for riches on his deathbed. Yet even Bilbo is not completely free. He ends the book in secret possession of the Ring that he stole from Gollum, which (as we see in the subsequent novel and film) has a power to corrupt the wearer even stronger than a dragon’s hoard. This evil is only overcome by Frodo, who inherits the Ring in the later novel.

Top illustration by John Howe. Others by Ted Nasmith.

Note. There is always more to say about Tolkien. See this recent article on The Hobbit by Alison Milbank.