The four rivers of meaning (2)

I have been writing about the four meanings of Scripture, a traditional doctrine revived in the Catechism of the Catholic Church (115-118): "According to an ancient tradition, one can distinguish between two senses of Scripture: the literal and the spiritual, the latter being subdivided into the allegorical, moral and anagogical senses. The profound concordance of the four senses guarantees all its richness to the living reading of Scripture in the Church" (115).


We must start with the historical or literal meaning (the plain sense of the words, as they were evidently intended to be understood, taking into account the genre and context in which they were written), and then move on via an understanding of “typology” to the doctrinal message the words and events convey about Christ, who is the centre of Revelation. We then draw
the moral conclusions that follow from this reading, for our own conversion and behaviour. Finally we raise our eyes above this life to catch a glimpse of the end of all things, the goal of our striving, the very life of God to which we are called. According to a medieval rhyme quoted by the Catechism: "The Letter speaks of deeds; Allegory to faith; The Moral how to act; Anagogy our destiny" (118). Or in another translation: “The letter teaches what took place, the allegory what to believe, the moral what to do, the anagogy what goal to strive for.”

St John Cassian (d. 435) writes of the four meanings as follows: “History embraces the knowledge of things which are past and which are perceptible…. What follows is allegorical, because the things which actually happened are said to have prefigured another mystery…. Anagoge climbs up from spiritual mysteries to the higher and more august secrets of heaven…. Tropology is moral teaching designed for the amendment of life and for instruction in asceticism."[2] So, for example, “the one Jerusalem can be understood in four different ways, in the historical sense as the city of the Jews, in allegory as the church of Christ, in anagoge as the heavenly city of God ‘which is mother to us all’ (Gal. 4:26), in the tropological sense as the human soul which, under this name, is frequently criticized or blamed by the Lord.”[3] 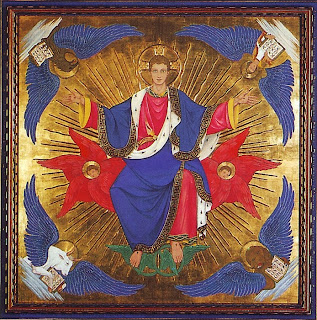 None of this undermines the rational or familiar approaches we have become used to. It just provides a fuller, more rounded view. We still start with the literal or historical meaning (the plain sense of the words, as they were evidently intended to be understood, taking into account the genre and context in which they were written). We then move through an understanding of biblical “typology” to what the words and events convey about Christ, who is the fulfillment to which Scripture points. We then draw moral conclusions that follow from this reading, as they are relevant to our own conversion and behaviour. Finally we raise our eyes above this life to catch a glimpse of the end of all things, the goal of our striving, the very life of God to which we are called. This tradition of the four senses is found in Jewish mysticism too (peshat, remez, derash, and sod).

The recovery of the “Four Senses” or “Four Causes” is needed to achieve deeper understanding of both Scripture and Liturgy. We must approach the “texts” of tradition in four ways – looking for historical, doctrinal, moral, and mystical meanings. This chart may help:

Material – Literal – Historical – What events are described, instructions given?
Efficient – Allegorical – Doctrinal – Meaning, according to the analogy of faith?
Formal – Tropological – Moral – How should we change, set our course?
Final – Anagogical – Mystical – What does it tell us about God, our End?

The doctrine of the four senses is the key to mystagogy (literally a “leading into the mysteries”) – a deeper understanding of liturgy, sacraments and scripture: all the “texts” of the tradition. In Evangelii Gaudium, Pope Francis tells us that mystagogy has been neglected and needs to be revived. "Many manuals and programmes have not yet taken sufficiently into account the need for a mystagogical renewal, one which would assume very different forms based on each educational community’s discernment" (n. 166). Teaching the doctrine of the four senses is one way to help bring about this renewal.

If we are to teach and transmit the tradition to the next generation, we need to hand on that tradition in its fullness. Simplistic or moralistic Bible stories are not enough. Doctrinal instruction is not enough. The full range of meanings must be made available. At the very least, they must not be closed off. As the Catechism says, "Sacred Scripture is written principally in the Church's heart rather than in documents and records, for the Church carries in her Tradition the living memorial of God's Word, and it is the Holy Spirit who gives her the spiritual interpretation of the Scripture" (113).