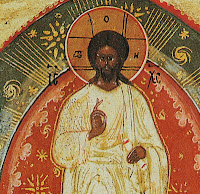 One of those triads is composed of the so-called "transcendental properties of being", meaning properties that are so "general" that they can be found in varying degrees in everything that exists. The three I mean are Goodness, Truth, and Beauty – although one might also look at the threesome of Unity, Truth, and Goodness. As I explain (Beauty in the Word, p. 157), such triads are impossible to align definitively with particular members of the Trinity, because they can be looked at under different aspects. In fact each is one of
the Names of God, and applies to all three divine persons. The human being who searches for any of them is on the road to God, on whom these three roads converge. The Transcendentals are vitally important if we are to understand the world as a cosmos and build a civilization worthy of our humanity.

I want to propose an idea that came to me after writing Beauty in the Word, that might serve as an interesting footnote, or open up another avenue to explore. It is this. Human civilization seems to have three pillars: Law, Language, and Religion. It is these that make us into a community or nation. And in each case the aim or goal is one of the Transcendentals, even if they cannot reach that goal without divine assistance. The aim of the Law is goodness, the aim of Language is Truth, and the aim of Religion is (spiritual) Beauty -– that is, holiness. Culture is the result of all three; of Law, Language, and Religion acting in concert (body, soul, and spirit, as it were).

But how does this relate to the Trivium? Law it seems to me aims to recall us to our true nature, or encourages us to rise to our highest nature. In that sense it corresponds to Memory or Grammar. (The moral or natural law, as Pope Benedict has written in his little book On Conscience, may be equated with Platonic "reminiscence", which is in Christian terms an awakening to our true nature in God's intention.) Language then corresponds to Thought, meaning the human quest for truth in all things. (For in order to understand reality we must discern the Son, the Logos of all things.) Thirdly, Religion in the sense of a tradition or path of holiness is what gives the spirit that animates the community. It is this that makes us aware of our intimate relationship to each other, able to speak "heart to heart".

This is an extension of an idea I put forward in the book, that before we reform our schools we need to understand more deeply the goal of education, which is a truer humanity and a civilization of love.

NEXT: The Spiral Curriculum.