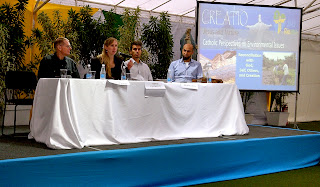 Sophie Caldecott (now Lippiatt) is representing her family at WYD this year, having been invited by Creatio to speak on Faith and the Environment to the young people there. It is a talk she and her dad wrote together, representing the concern of two generations for the world that we will hand on to the next. Ecology should be part of everyone's education. Taught the right way, without the intrusion of ideology, it can help to awaken a deeper appreciation for God's creation in its complexity and interdependence, as well as a sense of moral responsibility. In fact a concern for ecology and conservation runs deep in the family. Her uncle Julian is a professional conservationist. Leonie, her mother, also has a deep interest in the subject, and her great-grandfather, an artist, was involved in setting up the Kruger National Park in South Africa. Sophie's talk on 24 July began like this:

Through the pontificates of John Paul II, Benedict XVI, and Francis, ecology has become an important part of Catholic social teaching. In 2011, Pope Benedict said, "The importance of ecology is no longer disputed. We must listen to the language of nature and we must answer accordingly.” In his
inaugural Mass, Pope Francis asked us to become “'protectors' of creation, protectors of God’s plan inscribed in nature, protectors of one another and of the environment." We have been reminded over and over again that, as Pope Francis also said in a Tweet on 5 June: “Care of creation is not just something God spoke of at the dawn of history: he entrusts it to each of us as part of his plan.”

What I want to do in this talk is reflect on the “plan” that the Pope speaks of. In particular, I want to show how ecology is part of a much wider plan that includes something you may not think at first was related to ecology at all – namely the Theology of the Body. But in fact, the Church’s teaching on the environment and on the human body, on cherishing the natural world and cherishing our human nature, belong together. They cannot be separated.

Of course, in some ways the natural environment is easier to talk about. Our generation is at last waking up to the beauty, the richness and diversity, the fragile complexity, of the environment on which our lives and societies depend. We are waking up to it because it is evaporating in front of our eyes. Philip Larkin’s poem, "Going, Going", sums it up in a very moving way. “I thought it would last my time - / The sense that, beyond the town, / There would always be fields and farms, / Where the village louts could climb / Such trees as were not cut down…” he begins, going on to say that now he is not so sure: “For the first time I feel somehow / That it isn’t going to last”. Suddenly all of these changes seem “To be happening so very fast”. Another of my favourite poets, Joni Mitchell, in her song “Big Yellow Taxi”, says something similar. You don’t know what you’ve got till it’s gone!

My uncle Julian has been working as a conservation biologist all over the world for more than 30 years. During that time, he has seen so many landscapes devastated and so much of the world depleted and degraded that he finds it hard not to be depressed. He tells me that around 70% of the millions of land-based species on the planet used to live in areas that were particularly supportive of life (rainforests, for example). These areas amounted to about 16% of the earth’s land surface. But since 1950, around 86% of that rich habitat has already been destroyed, mostly by human farming and industry. You can imagine the effect on biodiversity.

Don’t worry, this talk is not going to be full of statistics. The point is simply this. My uncle has dedicated his life to trying to save as much as he can, but he is doing it without the support that our faith gives us. He is defending God’s creation without even knowing who God is – just because he knows it is the right thing to do. Not only is he defending the beauty of nature, but he is trying to help preserve human life on earth, which depends on the survival of the “ecosystem”. As Catholics, we have even more reason to get involved in this issue. [... read next section ...]