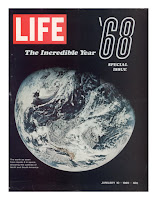 One of the symbols of the ecology movement is a famous photograph of the earth from space that was taken by one of the Apollo spaceships on a lunar mission in the late 60s. It showed people very vividly that we all live on one extremely beautiful and delicate planet. It tells us that all creatures on the earth are dependent on the ecology and resources of planet earth. Political boundaries between one nation and another are invisible from space, and so the image also came to represent a way of transcending our national differences and our enmities in order to work for the preservation of the planet we share.

But the image also teaches us something else. We are just one among many
millions of animal species – but it shows us that human beings are special. It is only the human animal that can venture into space in order to take such a photograph. And like it or not, we play a central role on the planet. Even secular ecologists admit that we are more capable than any other species of destroying the entire ecosystem. This means that we have a heavier responsibility than any other species. And our Christian faith tells us that this responsibility is part of what we were created for. The Book of Genesis (2:15) tells us that “God took the man and put him in the garden of Eden to till it and keep it.” That vocation to cultivate and look after the earth continues after our exile from the Garden of Eden; that is, after we began to sin. All that changed was that the job suddenly became more difficult. God told Adam: “cursed is the ground because of you; in toil you shall eat of it all the days of your life; thorns and thistles it shall bring forth to you; and you shall eat the plants of the field” (Gen. 3:17-18).

This looks like a punishment, but really it is just the natural consequence of what man had done and what he had become. He had run away from God, tried to hide in the forest, ashamed of his own body. He had become alienated from God – no wonder everything had become more difficult for him! And the thing to underline is that in becoming alienated from God, he was also alienated from himself, from his wife, and from his own body. When God quizzes him about what had happened, he admits eating the forbidden fruit (whatever that means – it isn’t necessarily an apple!), but he blames his wife for giving it to him. And his own body (and hers) is now an embarrassment to him. He is aware of himself as a lonely creature in a dangerous world that he can never quite understand. The return to God is going to be a long and difficult road.

And yet man remains special. Even in disgrace, he has a unique relationship with the world. He and the woman together, who were made to help each other in this, are not abandoned by God just because of sin, since God now clothes them with skins so that they will survive outside the Garden, and sends them out to “till the ground” (again) from which they were taken (Gen. 3:23). They are given the same job they had before they fell from grace!  [Continued here.]