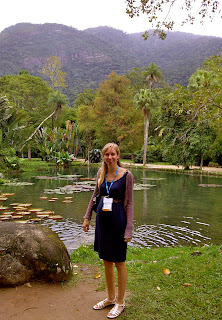 The last part of Sophie's talk in Rio, HUMANISING ECOLOGY.


Taking all of this into account, it means that we need a humanistic ecological vision that takes account of the special nature of human beings, as well as the ecosystem in which we belong. This vision, as Pope Benedict said, should take in “not only the environment but also life, sexuality, marriage, the family, social relations”; that is, our “duties towards the human person” (Caritas in Veritate, 51). For all these things are part of what we mean by the nature of human beings. We are social by nature. We are born into families. We find meaning in our lives through loving and serving others. We have a dignity that can be expressed in the form of rights and duties.

Pope Benedict taught us that Christianity tries to balance the value of the human person with the value of nature as God’s creation. The Book of Genesis – as well as the Psalms and many other parts of the Bible, which praise the glories of nature – teach Christians to be responsible and gentle and wise in the way we behave towards the world around us. The virtue of
Prudence instructs us to take special care to preserve the natural resources on which our lives and those of our children depend. The other three “cardinal virtues” that are part of the Christian life are just as relevant. Temperance tells us that we must not become greedy, addicted to consumption, living a lifestyle that depends on having more and more. The virtue of Justice reminds us that many of us in the richer countries of the world support our lifestyle at the expense of the poorer countries. And we need the virtue of Fortitude or Courage to strengthen us for what we have to do – to find ways to change the way we live, to be kinder to the earth, fairer to our fellow human beings, and merciful towards the animals and plants that God has created out of his love and wisdom.

Pope Francis recently condemned our culture’s unrestrained greed, saying: “Man is not in charge today, money is in charge, money rules. God our Father did not give the task of caring for the earth to money, but to us, to men and women: we have this task! Instead, men and women are sacrificed to the idols of profit and consumption: it is the ‘culture of waste.’”

We need to escape this culture of waste that we have created: it is our duty as Christians.

Pope Benedict said that, while Christians have a host of compelling reasons to become ecologically responsible, nevertheless “modern Christianity, faced with the successes of science in progressively structuring the world, has to a large extent restricted its attention to the individual and his salvation” (Spe Salvi, n. 25). That means we have been too concerned about “me”, about my personal situation, my salvation, or mine and that of my immediate circle – not enough concerned about the rest of the world. But as Christians we shouldn’t separate the two, because the world has been given to us by God to look after. We can’t hope to save ourselves without trying to fulfill this mission with which we have been entrusted. So the other reason that prevents us getting involved in ecology is “individualism”. It is a disease of our culture, and it is this that makes us isolated, and prevents us working together for the sake of others.


Here are some final statistics. In 1960, according to the US Environmental Protection Agency, the United States produced approximately 88 million tons of municipal waste. By 2010 that number had risen to just under 250 million tons. This jump reflects an almost 184 percent increase in what Americans throw out, even though the population increased by only 60 percent. Everything we buy these days is produced to be cheap and not to last, wrapped in layers of plastic packaging that more often than not ends up in landfill sites. As a culture we seek quick fixes and easy options, but these quick fixes are costing the planet – and subsequently future generations – a lot. The production of clothes, for example, has a major impact upon human lives as well as the environment, for the most part not seen or considered by the average shopper. “Prices rarely include the real social and environmental cost,” says Safia Minney. She is the founder of the successful ethical fashion line, People Tree. In fact, once again, we see that the environmental and human elements cannot be separated. The World Health Organisation believes that around 20,000 farmers in developing countries die a year as a result of agricultural pesticides used in cotton farming.

I said that I was going to speak about how environmental ecology connects with the Theology of the Body. Well, ethical fashion is an example. Remember that clothing is a huge industry worldwide. Remember also that it is all about those fig leaves and those coats of skin in the Garden of Eden, the protection and ornamentation of our alienated human bodies. The clothing industry is only one among many, but it demonstrates exactly how a pattern of consumer choices that seems very trivial at the time adds up to create a huge impact both on our fellow human beings – such as the workers who are employed to make the clothes as cheaply as possible – and on the environment that is partially transformed, for better or worse, by our actions.

As young people we are consumers of clothing, and most of us would agree we should try to make sure we are not supporting unfair businesses, or buying things whose negative impact on the environment is hidden from view. If we are running a business, it is easy to say that we must not exploit our workers unfairly, or use immoral or illegal business practices to destroy competitors. That’s easy to say, sometimes less easy to do, in a fiercely competitive economy. We need ethical consumer organizations and corporate whistleblowers to help us. One thing we mustn’t do is assume that what we buy, what we wear, what we eat, is somehow unconnected with what I was saying earlier about the planet. If there is one thing ecology has taught us, it is that everything is connected.

In his speech to the German Bundestag in September 2011 called “The Listening Heart”, Pope Benedict said this: “We must listen to the language of nature and we must answer accordingly. Yet I would like to underline a point that seems to me to be neglected, today as in the past: there is also an ecology of man. Man too has a nature that he must respect and that he cannot manipulate at will. Man is not merely self-creating freedom. Man does not create himself.”

The Theology of the Body by Pope John Paul II is all about what we find when we understand our own nature as created by God. The Pope talks about the “spousal” or “nuptial” meaning of the body, about the fact that we were made for love, and that there is a “way of living the body” in its authentic masculinity and femininity. This nuptial meaning has been limited, violated and deformed over time and by modern culture, until we have almost lost the power of seeing it, but it is still there to be discovered with the help of grace, like a spark deep within the human heart. The “language of the body” is part of that “language of nature” that Pope Benedict speaks of. The way we live, the clothes we buy and wear, the work we do, the way we treat each other, and, yes, the way we treat animals and the whole of nature, should reflect our understanding of that language – the fact that we are put here not to destroy and exploit but to love and cooperate.

***
By way of conclusion, I want to sum up very briefly the difference between secular and Catholic environmentalism.

The extreme secular attitude to climate change and ecology could be represented by this short and snappy quote from the environmental organization Greenpeace: “The earth is 4.6 billion years old. Scaling to 46 years, humans have been here for 4 hours, the industrial revolution began 1 minute ago, and in that time, we’ve destroyed more than half the world’s forests.” Humans, in other words, are the enemy of the earth.

Standing here in front of you, more than halfway through my first pregnancy at the age of 25, you could say that I physically embody the fundamental difference between secular and Catholic understandings of ecology and environmentalism. The secular environmentalist might say, on the basis of the Greenpeace quote I just read, “Don’t have children if you can help it! Or if you must, have one or two at the very most. Humans are to blame for environmental damage, and it would be better if we had never existed.” But the Catholic environmentalist says something different. The Catholic might say: “Yes, it is true, and terrible, that we have let down the rest of creation by being bad stewards of its treasures. But we are the greatest treasure of them all – the natural world’s most precious resource – and we still have the power to turn this around, with God’s help. It is by continuing to have children, and by teaching those children well, that we can help clean up the mess that we have made.”

In our families, and with our children when they come, we must draw on the love that opens our eyes to reality, as Pope Francis says in his encyclical Lumen Fidei (2013): “Faith knows because it is tied to love, because love itself brings enlightenment. Faith’s understanding is born when we receive the immense love of God which transforms us inwardly and enables us to see reality with new eyes” (n. 26). In turn, by revealing the love of God the Creator, faith “enables us to respect nature all the more, and to discern in it a grammar written by the hand of God and a dwelling place entrusted to our protection and care. Faith also helps us to devise models of development which are based not simply on utility and profit, but consider creation as a gift for which we are all indebted” (n. 55).

NB. Sophie has an interesting article on beauty on her own blog.