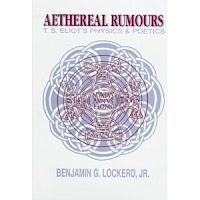 An important book by Benjamin G. Lockerd Jr, Aethereal Rumours: T.S. Eliot's Physics and Poetics, does for The Waste Land and the Four Quartets something of what Michael Ward does for the Chronicles of Narnia by C.S. Lewis in Planet Narnia. In his book, Michael Ward shows that each of the seven tales of Narnia was intended by Lewis to correspond with one of the seven astrological planets – taking these as spiritual symbols of perennial value (as he does in his academic works on Medieval and Renaissance literature, and in the Space Trilogy). Similarly, Lockerd shows that Eliot was always concerned with reconciling poetry with science, and unlike other modern poets "increasingly placed his poetry quite consciously and deliberately within
the cosmos described by the ancient philosophical physics" of Heraclitus and Aristotle. He was an admirer of modern science, but not of scientism, meaning the cult of a science deemed purely "objective" in contrast to the "subjective" arts. He sought to overcome this false dualism in his own work, and so was drawn to a "science of essences" that he did not believe had been superseded by modern chemistry or physics. The Waste Land has five sections which correspond symbolically and thematically to the five elements (including the fifth, aether, which Plato in Timaeus 55c associated with the fifth regular solid, the dodecahedron, on which the Demiurge embroidered the constellations). Each of the Four Quartets corresponds to one of the four earthly elements with the fifth present throughout; especially, I would speculate, in the fifth section of each poem. Lockerd's book was encouraged by Russell Kirk and partly written at Piety Hill. It is a valuable contribution to the literature connecting ancient and modern science, as well as science and poetry.