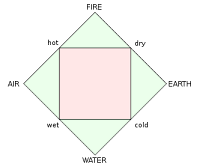 Plato posited an even more basic level of composition to the universe; particulate or geometrical in nature, rooted in the triangle. A footnote in my book All Things Made New reads as follows: "In the Timaeus, Plato
hypothesizes that the elements themselves are made of particles built up from triangles into the forms of the five regular solids. Since the pyramid is the figure with the fewest faces, it must be the most mobile, the sharpest, most penetrating, and lightest. He therefore identifies it as the basic constituent of Fire. Air is composed of octahedrons, Water of icosahedrons. The fifth Platonic solid, the dodecahedron, being the closest in form to the sphere, was associated with the fifth element Aether, the Hindu Akasha, or Space. Though the existence of a too crudely imagined ‘Ether’ as the bearer of electromagnetic waves seemed to have been disproved by Michelson and Morley in 1887, the ancient concept reappeared as Einstein’s notion of a unified space-time continuum. The Platonic elements are basic to our experience of the world. The same can hardly be said of two further ‘states of matter’ recently created in the laboratory by super-refrigeration close to absolute zero, namely Bose-Einstein and fermionic condensates. Symbolically, therefore, the ancient scheme remains intact." 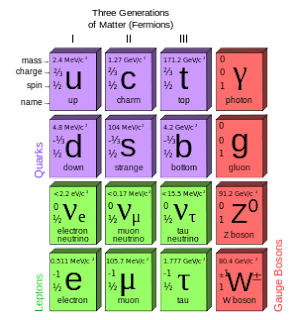 There are four basic states of matter – solid, liquid, gas, and plasma – and four fundamental forces known to physics – termed weak, strong, electromagnetism, and gravity. Neither of these patterns of four seems to capture the full resonance of the ancient elements. Even so, the four-by-four symmetry of the Standard Model of particle physics is intriguing (the gauge bosons in the pink column are the particles that carry the four fundamental forces), with the Higgs field/ boson playing the role of the mysterious "fifth element". The comparison is no doubt superficial, and the Standard Model itself may well fail in years to come, but physics remains Platonist in inspiration so long as it seeks to determine the fundamental elements making up the natural world in the simplest and most elegant combination.

The next issue of Second Spring (due out this summer) will be on the theme of faith and science.