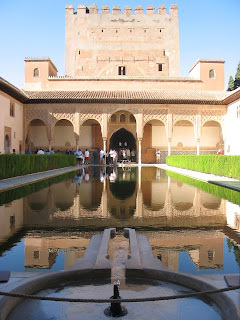 In their early period of rapid expansion the Arabs took over the Middle East, acquiring and preserving much of the ancient learning. They also developed it, picking up in many ways the intellectual torch of the Greeks. There was a brief shining moment some centuries later when Europe was able peacefully to absorb the knowledge of the then vastly superior Islamic civilization, through translations made in Toledo and the efforts of adventurers like Adelard of Bath. This transmission, as much or more than the redicovery of ancient learning in Italy, lay the foundations of the Renaissance and the rise of modern science. The story is told by historian Bettany Hughes in her accessible TV history documentary about the Moors in Spain - part of a larger series of excellent history programmes. Readers may like to see this clip about the Alhambra Palace in Granada, one of the wonders of the world, in the second half of which she talks about the legacy of Pythagoras and the geometrical principles that made possible this stunning architectural achievement.