I have written previously about a radical form of homeschooling called "unschooling". Perhaps the best introduction to unschooling for Catholics is a book edited by Suzie Andres, which I had previously seen in draft. Now published under the title A Little Way of Homeschooling, it is based on the experiences of a group of home-schooling families who saw in John Holt the articulation not just of a theory but of a spirituality of education, akin to the “Little Way” of St Thérèse of Lisieux – a way of trust and simplicity. Being based on the actual experiences of families over many years, the book builds a certain confidence that unschooling is not merely an ideology, and need not be considered an impractical, idealistic dream. (I should mention also the delightful black and white line drawings.)

These parents know exactly what they are doing. Here is Karen Edmisten: "Most of us would probably agree that in many areas of our society specialization can and does lead to fragmentation. Parsing education into subjects, which are then studied in a vacuum apart from other subjects, can also lead to a fragmented understanding of both the subjects and the world around us." Contrast the method or "unmethod" described in action here, in which history is full of literature, literature marches through history, history is interlaced with science, and everything points to Faith, because everything is connected with the Reason of everything.

There is in fact a deep compatibility between the radical homeschool or unschooling approach to education and other manifestations of the Catholic understanding of human nature. Natural Family Planning, like unschooling, is regarded by many as an impractical ideal or an ideology, but when practised in the right spirit it reveals itself as something else entirely. The point about NFP is that it requires mutual respect and attentiveness to the whole person of the spouse. It should not be treated as just another instrument for achieving the aim of reducing fertility. For a couple to master NFP is to for them to grow in mutual love and knowledge. Similarly, unschooling is based on respect for the child and love between generations.

And yet the accounts in the book underline one important fact. It seems that, to be realistic, one must acknowledge that the success or failure of the unschooling as well as the homeschooling approach depends in large part not just on the individual child and his motivation, but on the family as a whole, especially the parents. The flourishing of any individual requires the right kind of attention from others. Precisely because unschooling is a spirituality, it will only succeed (on almost any measure of success) if the family is of a certain type or has a certain maturity. As Cindy Kelly says in her chapter, “The most powerful way to encourage my sons to enjoy a new area of learning is to model it myself and continue our dialogue about their interests and mine.” Not every parent is capable of that; not all have the leisure, confidence, or motivation to do so. But for those who do, I can imagine - after reading this book - that it might work beautifully well.
8 comments: 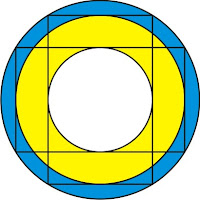 But my conception of the Golden Circle has evolved, and Michael Schneider has kindly redrawn it for me on the right (an intermediate stage was discussed in an earlier post). The Golden Circle itself is now a Golden Ring, shown in yellow. There are in fact three circles, one inscribed within the short sides of a Golden Rectangle, one inside the long sides, and one through the corners of the rectangle. On the basis of Pythagoras's Theorem, a large number of relationships can be established between areas and lengths in this figure, since we know that the circumference of a circle is Pi multiplied by the diameter, and the area is Pi multiplied by the radius squared. For example, the circumference of the middle-sized circle (the outside of the yellow ring) is Pi times Phi. But I'll leave you to work out what the rest of them are. Let me know sometime. It might make a nice exercise for a geometry class. The theology can wait.
No comments: 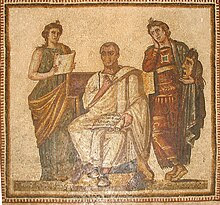 What is a "great book"? It is surely a book that stands re-reading many times, and deserves to be so read. And an educated person is one who knows the great books, and re-reads them. C.S. Lewis is quoted in Walter Hooper's Foreword to C.S. Lewis's Lost Aeneid (a wonderful new parallel text from Yale that could be used to teach Latin translation as well as introduce the Aeneid), as follows:


There is no clearer distinction between the literary and the unliterary. It is infallible. The literary man re-reads, other men simply read. A novel once read is to them like yesterday's newspaper. One may have some hopes for a man who has never read the Odyssy, or Malory, or Boswell, or Pickwick; but none (as regards literature) of the man who tells us he has read them, and thinks that settles the matter. It is as if a man said he had once washed, or once slept, or once kissed his wife, or once gone for a walk.

I feel better, now, about having read The Lord of the Rings so many times. Reading great books, however (even more than one), does not suffice to make a person educated. They need to be placed in a context, they need to be loved, and they need to open the door to other interests and other

Diagram of the cosmos 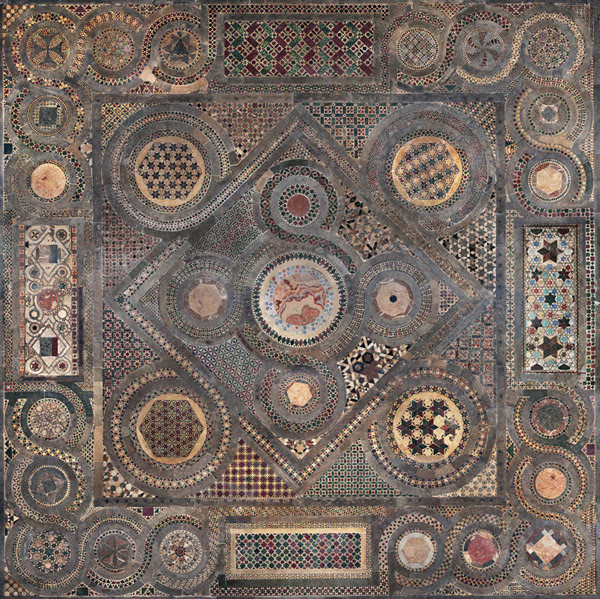 The Cosmati Pavement in Westminster Abbey was underfoot when the Pope met the Archbishop of Canterbury in 2010, and when William married Kate in 2011. It is the traditional site of royal coronations -- 38 kings and queens have been crowned on this spot since 1268 (the symbolism of the ceremony is analysed by Aidan Nichols OP in his book The Realm). The Pavement is a kind of Western "mandala", a representation of the entire cosmos based on squares and circles and sacred numbers. I have posted about it before, but there are things to add. For one thing a much more detailed image of the entire Pavement is available here, on the Getty web-site.

The central disk of onyx represents the world, and the two sets of four roundels around it the four elements and four qualities unified by love, a symbol of the Great Chain of Being that bound the monarch to the lowliest subject and the highest angel under God, as in this fifteenth-century text:


"In this order, hot things are in harmony with cold, dry with moist, heavy with light, great with little, high with low. In this order, angel is set over angel, rank upon rank in the kingdom of heaven; man is set over man, beast over beast, bird over bird and fish over fish, on the earth, in the air and in the sea: so that there is no worm that crawls upon the ground, no bird that flies on high, no fish that swims in the depths, which the chain of this order does not bind in the most harmonious concord. Hell alone, inhabited by none but sinners, asserts its claim to escape the embraces of this order." (Sir John Fortescue, trans. On Nature, 1492.)

There was a Latin inscription to accompany the Pavement which described the age of the world from beginning to end as 19,683 years - the lifespan of the macrocosm conceived as a living creature. However inaccurate this is in terms of modern cosmology, it was an attempt to make the Pavement an image of the whole of space-time. We lost our "Theory of Everything", and modern science has been trying to get it back ever since.

C. John Sommerville's book is a brilliant indictment of the modern university. He writes about it in an article published in Reconsiderations, available online. As he says there, "Secularism is an impoverishment of thought. Religion can be a way of opening our minds, and quite relevant to intellectual questions," adding:

This seems to be a good example of the right kind of "post-secularism" -- what many Catholic thinkers these days are calling "a new secularity" genuinely open to truth, unlike the "liberalism" wrongly so called, which closes the mind in advance by operating with a narrow conception of both reason and freedom.
No comments:

Labels: secularism, universities
Newer Posts Older Posts Home
Subscribe to: Posts (Atom)
This is a blog by Stratford Caldecott for secondspring.co.uk. All rights are reserved. Click on the covers below for more information. For a list of all books by Stratford, go HERE. FOR STRATFORD'S OTHER BLOG GO HERE.