Themes of the book: 1 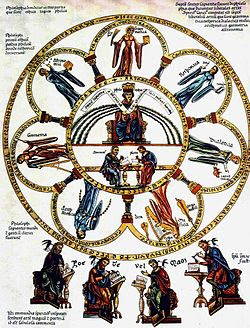 My recent book, Beauty in the Word (see right), a sequel to Beauty for Truth's Sake, covers a lot of ground, so I thought it would be helpful to readers if I produced a "study guide". In a series of occasional posts, I intend to look at some of the key themes and ideas in the book.

1. The Trivium. This is what the book is about. The word refers to three of the traditional "seven liberal arts" that were the basis of the classical and medieval school curriculum, namely Grammar, Dialectics or Logic, and Rhetoric. (The other four, the so-called "Quadrivium" of Arithmetic, Geometry, Music, and Astronomy, were discussed in the previous book.)

I must admit, when I was first asked to write on this topic, I wondered if it could be made interesting enough. The Trivium sounded a bit boring to me, as I'm sure it does to many people. The rules for correct speech and the dry bones of logic? Give me a break! But as soon as I entered into the subject I found unexpected vistas opening up. It was a bit like entering the Tardis (Dr Who's vehicle, larger inside than out).


The key for me was to discover that the three elements of the Trivium link us directly with three basic dimensions of our humanity. No wonder they are so fundamental in classical education! I tried to bring out this hidden depth by talking not about Grammar and so on but about Memory, Thought, and Speech. To become fully human we need to discover who we are (Memory), to engage in a continual search for truth (Thought), and to communicate with others (Speech). (I suppose I might equally have approached these in terms of Maurice Blondel's three categories of Being, Thought, and Action.)

In modern times the most famous writer on the Trivium, whose essay "The Lost Tools of Learning" inspired the revival of classical education, is Dorothy L. Sayers. In it she wrote:


"The whole of the Trivium was... intended to teach the pupil the proper use of the tools of learning, before he began to apply them to 'subjects' at all. First, he learned a language; not just how to order a meal in a foreign language, but the structure of a language, and hence of language itself – what it was, how it was put together, and how it worked. Secondly, he learned how to use language; how to define his terms and make accurate statements; how to construct an argument and how to detect fallacies in argument. Dialectic, that is to say, embraced Logic and Disputation. Thirdly, he learned to express himself in language – how to say what he had to say elegantly and persuasively."

But modern education, she went on, has put the cart before the horse. It has reduced the Trivium to the teaching of various "subjects", and neglected the tools of learning. She proposed to reinvent it. She did so bearing in mind a rough theory of child development, based partly on self-observation. (I did not give this enough attention in the book, I admit, so this is by way of reparation.) She had noticed that children go through a Poll-Parrot, a Pert, and a Poetic phase before they reach puberty. At each stage a certain approach to each subject will come easier than others. Thus she writes of the need to teach the "Grammar" of the various subjects (languages, history, geography, science, mathematics, and theology) at the Poll-Parrot or imitative stage, the "Dialectic" of each subject at the Pert stage, and finally the "Rhetoric" dimension when the children reach the more Poetic or Romantic stage of their development.
It is a brilliant approach, and one that has since revolutionized education in many small schools. As she says, "the tools of learning are the same, in any and every subject; and the person who knows how to use them will, at any age, get the mastery of a new subject in half the time and with a quarter of the effort expended by the person who has not the tools at his command." It may offer a key to reversing the decline that followed the dismantling of the liberal arts in most Western countries:


The truth is that for the last three hundred years or so we have been living upon our educational capital. The post-Renaissance world, bewildered and excited by the profusion of new "subjects" offered to it, broke away from the old discipline (which had, indeed, become sadly dull and stereotyped in its practical application) and imagined that henceforward it could, as it were, disport itself happily in its new and extended Quadrivium without passing through the Trivium.

Of course, the history of the liberal arts is actually quite complicated, more so than Sayers had time to explore in a brief essay. Quite how complicated may be seen from an outstanding doctoral dissertation by the inventor of Media Studies, the philosopher Marshall McLuhan, published in 2006, long after his death. The Classical Trivium explores the development of the three elements of the Trivium, and the way each vies for supremacy until by the Renaissance they appear to have been wound around each other inseparably, only to be unpicked and stretched to breaking point by the new learning. (I have written about this already here.)